My Problem With HTFU

Earlier in the week when I posted on that “not so fresh feeling”, I couldn’t help but throw in a punny little graphic about douche to go with it. “HTFU”, to me, represents the douche-iest aspects of cycling culture, and I combed Google for the douche-iest visual representations of it to go along with my post. Yes, the scantily-clad women *already* had her head cut off before I smushed the images together. Why would she need a head? I realize that I do love to occasionally throw shade at HTFU culture in my blog, so I thought I might be time to explain why.

I grew up in a family where lazy was the absolute worst thing you could be, so any implication that I might be lazy or weak is pretty crushing to my subconscious, even if my more rational self realizes that giving 100% to everything all the time is impractical. Because of this bias, I often feel like that in cycling, lazy is also the worst thing that you can be. To me, “HTFU” seems like a message handed down from cycling’s “elite” that if you’re not working until your body gives 100% of the time and sacrificing everything to be a better cyclist, then you’re bad and you should feel bad. 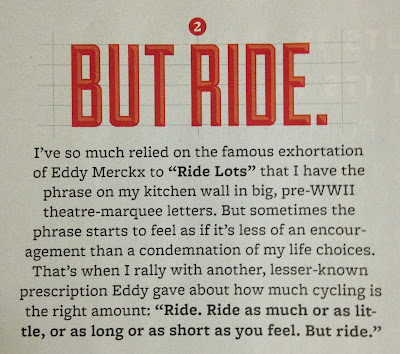 I came across the snippet above while flipping through an issue of Bicycling magazine that appeared in my mailbox last week. I thought that my teammate's dog would be featured, which is why I tore into it so quickly only to find no Giro but this little gem as consolation. It's true that while the other stalwart staple of cycling slogans, "Ride Lots", is less inherently a judgement on the character at which it is directed, as the author points out, it can still feel like a condemnation of your life choices when you're not doing it.

Luckily, as hard as the tough-man pressures of cycling culture do occasionally weigh on my subconscious, my conscious observation had lead me to the conclusion that success comes more often not from overt sacrifice and suffering, but hard work that incidentally happens when you enjoy what you're doing. Last Saturday during the podium presentation for the women's cyclocross world championship, the commentator was narrating Sanne Cant's distraught reaction to her third-place finish. He said that she'd told him before the race that there's no way that she could have trained any harder. Given, I'm paraphrasing the commentator and he was probably paraphrasing her, so there's likely a bit lost in translation, but my reaction that I shared with Frank was that kind of attitude was likely her problem. He looked a little shocked, as criticizing other cyclists' work ethic is not really my M.O. these days. I realized how he had interpreted my statement and explained that I wasn't saying that she needed to HTFU, I was saying that when you become that focused on what you've sacrificed for something, the resulting pressure stands in the way of actually getting it.

I know this because I've felt the way I'm imagining her feeling, except that it was about Cat 3 mountain bike races and there were no cameras on me. But the crushing blow of "part timers" showing up and kicking your ass? I know those feels. I know them so much that they finally stopped bothering me much after a few years.

I'm not saying that you don't have to work to be a successful cyclist. I'm saying that you're probably going to be better off if you're not focused on the work being hard. Yeah, you're always going to have to drag yourself out the door from time to time, but I think that any extended resentment of your training regimen is a bad sign. Of course, one might ask what the hell I know on the subject, since it's not like I've become super fast since giving up on trying to prove myself to be toughest, hardest-working chick around. I did, however, become marginally faster after giving up on dragging through training that I hated.

I now plan my training based on the time and energy that I have to put towards it, not how much I "should" be training based on what other people do. If other people can put in more work without it sucking the life out of them, then I am happy for them, but it is important to remember that it doesn't make them better people, it just makes them better cyclists. And I'm okay with that.
Posted by Lindsay Hall-Stec at 5:37 PM