No Scrubs, Lots of Fatties

I’ve been remiss in my blogging the last couple of weeks, having not had any races on which to report. The weekend before Thanksgiving was the “state championship” race in the Pittsburgh area, which I believe only one PACX regular from my category attended. With Frank out of town at a conference, I just wasn’t inspired to drive three hours into unfamiliar ‘cross territory to race alone. It worked out better, anyway, as the two-week break from the “normal” PACX schedule was dedicated to preparation for #NoScrubsCX, Team Laser Cats’ first attempt at hosting an alley cat race.

I wanted to help as much as I could from my non-Philly location, so instead of racing on November 22, I had my first venture into Philly as an adult, not counting the unfortunate number of times that I’ve passed through the Philly airport since moving to PA. This allowed me to pre-ride most of the checkpoints with the team and get a better idea of what kind of challenge to present to folks at the cave checkpoint that I would be manning. For a lot of the following week, I was dedicated to making wizard hats and glow-in-the-dark Nerf bullets. 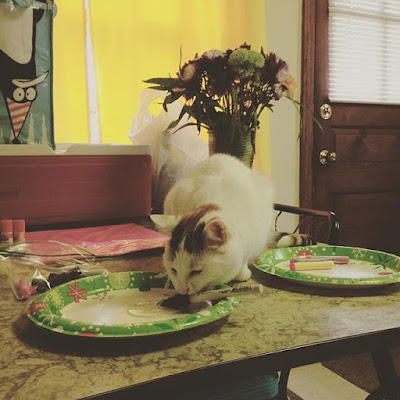 I can’t give too much of a race report, as I only witnessed the events of Kelpius Cave, but all other reports agree that the event was a resounding success. We had 59 racers attend, and I believe that a good time was had by all. Frank did the race while I was supervising my cave, and he seemed to enjoy it.


The other big concern for me during my racing break has been preparation for the New Jersey Fat Bike Series. With a 50 mile race looming on January 9 and my endurance capacity plunging down further and further with every weekend of ‘cross, I really wanted to use the break to reverse that trend. Thanks to two race-free weekends, Thanksgiving break, and an extra PTO day this week, I now have several 2-3 hour fat bike gravel rides under my belt.

However, cracking the 4-hour barrier continues to elude me. I’ve planned longer rides several times, but getting my hands used to long rides on flat bars and my sit bones used to the “horseback riding” position of a fat bike have proven tougher than I thought. The good news is that each of these shorter rides returned valuable information about the best training routes to prepare for the series.


While my gravel riding last summer was all about the climbing, for now I’m trying to keep my training as flat and steady as can be accomplished by State College standards. The first two races of the series are a 50 mile race with about 1500 feet of climbing followed by an 80 mile race with about 500 feet of climbing four weeks after that. Long, steady, and fast should be what I’m simulating in preparation for these races, but you have to work with what you have. This comes down to a 52 mile, 4000 feet of climbing “flat” route that I’ve settled on as my goal to finish before I leave for Christmas break. Also, I still haven’t actually ridden in snow, so there’s that X factor still looming.

Tomorrow will be the slightly-early end to my ‘cross season at Rivertown, which should have been my best race last season if I hadn’t accidentally kicked my brake open, lost my temper, and lost the part that held it closed, resulting in a DNF. It’s always hard getting back to racing after Thanksgiving, but I need to at least come back with disc brakes and a vengeance for such a combination of a close location and a good course. It’s unfortunate that this race was pushed back so late in the season, as pre-reg closed with 5 girls signed up in my race and me ranked DFL, but I’ll give my best shot and hope the singletrack helps me exceed Crossresults.com’s expectations.

Posted by Lindsay Hall-Stec at 1:08 PM