Lion of the Den/ Storm the Greens

This was what was running through my mind all last week and leading up to the Storm the Greens race. After a rapid fire campaign through the first seven races of the series, I was left with a two-week gap before race number eight. That's a lot of time to sit and home doing math and run through possible race scenarios. The worst part was knowing that after the two-week break was up, I would get one more small piece of the puzzle squared away, and then the last two races would be spread over a long five-week period. Luckily, I was able to increase my lead a little bit more yesterday which will probably help me make it through the next two weekends of third row starts behind higher category riders without going too crazy.

In addition to the Storm the Greens race, Adam and I also returned Yorktown, where we both rode bikes and went to bars a fair amount back in our Muncie days. My race was nothing to write home about. I basically tried to hang with Rebecca and Valerie, which only worked for a couple of minutes, and then basically settled in for 2.5 laps of time trial. I finished two minutes behind Rebecca and three minutes ahead of the fourth place rider, so it was kind of a long haul out there by myself.

You may notice from the picture below that I am wearing a Speedway Wheelmen kit. Adam's team director and teammates have been trying to get me to join their team all season because they want to have a real women's team. The plus side is that in addition to the one strong female rider they already had (Valerie from above paragraph), they got Jayne Prater and Janelle Renschler to join. So the part about having actual teammates that I'm already friends with is cool, but I'm really attached to my Velo Bella kit and I'm having a hard time giving it up. Seriously, the arrival of my new road bike marked the replacement of the one cycling related item I owned that was not some combination of black, white, pink, and blue. Now you're wanting me to throw orange in the mix? Now that I've seen the pictures, it looks better than I thought it would and I'm coming around to the idea of being a Speedway Wheel-woman. I'm going to need teammates if I want to race road in the spring, right? 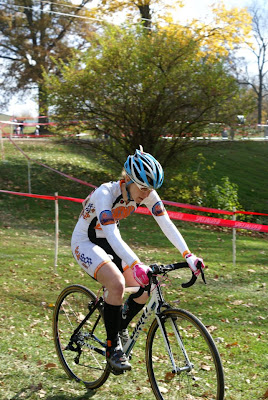 Storm the Greens went about as well as I'd hoped. I got the hole shot and held through the long, long straightaway to the first turn. Then I got nipped on the inside of the turn when I swung wide, and then I lost a couple of places when I had to dismount on the first steep uphill. After I regained my composure, I made one spot back and was chasing down another girl with pretty spotty success. Then I came through the one mud hole on the course (it was obviously put there just for the sake of having a mud hole) and saw the girl I'd been chasing with her legs pedaling wildly while her bike slow coasted to stop. She dropped her chain, and I dropped the hammer. The next girl up was pretty fair ahead, but I tried to stay on the gas as much as possible. Then on the final time through the mud hole I saw her stopped in front of me trying to get her bike going again. It was the like the Christmas mud hole for me. I kicked into high gear to try and hold her off until the finish, and it worked. I ended up fifth overall and first in the Cat 4 Open. Most importantly I increased my series lead enough that my fears of having it all taken away from me in the last race are starting to calm down a little. 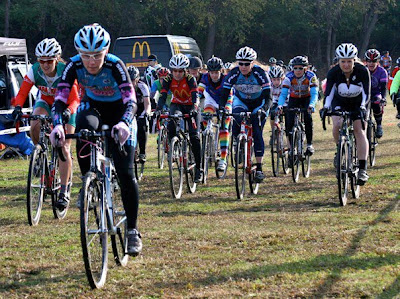 I picked a good race to win my category, because Storm the Greens gave out better prizes than the usual swag from the sponsoring bike shop's clearance bin. We got these cool Halloween shirts, a hooded sweatshirt for me and t-shirts for second and third place. 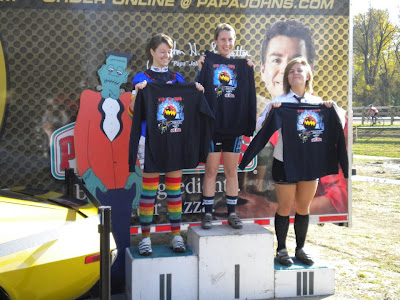 Posted by Lindsay Hall-Stec at 2:28 PM

And the award for the creative use of the Sven Nys Prayer Candle goes to...

Hey, I'm just glad you thought it up, because I couldn't think of anything else that remotely fit the rhyme scheme.