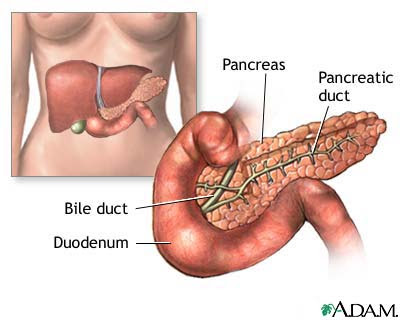 This is an normal pancreas. 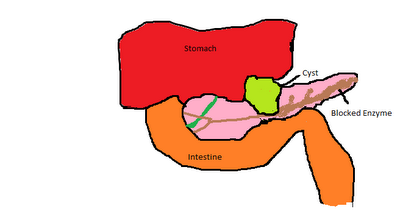 This is my pancreas. 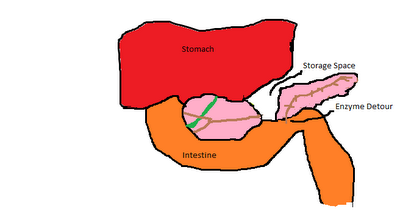 This will be my pancreas (or double pancreas) after December 27.
After two months of testing, examining, and above all, WAITING, I finally have a date for my surgery. In my last post I mentioned how I was worried that this thing would turn in major abdominal surgery, and the powers that be would continue to drag their feet resulting in the surgery not being done before Christmas. Unfortunately, I was correct on both counts. I underestimated my worst case scenario the seriousness of the surgery, but the date only missed the Christmas deadline by a couple days.
So here's the deal. Due to the size and location of my cyst, I have to have the middle part of my pancreas removed. Once that is done, the orphaned tail piece is going to be attached directly to my intestine, so that it can continue to produce pancreatic enzymes. Supposedly everything will still work pretty normally once it is all over, but healing is going to take a while.
I will have to be in the hospital for about seven days, and for the first three I will be all cracked out on a morphine pump with no food or drink. After that will be the starting to drink, eat, and walk enough to prove that I can survive on my own at home. After that, I will spend another 5-ish weeks recovering at home before I return to work.
As for the timeline for my return to cycling, I'm just going to play it by ear. I don't really expect to be able to mountain bike until late March, but really no one in Indiana gets to mountain bike more than a week or two before that, anyway. The difference is that I will have lost a lot of muscle and fitness. Since it's highly unlikely that I will be anywhere near healed enough for the Spa City 6 Hour or the Ouachita Challenge, as I had been planning, I might not rush into the beginning of XC season, either. I may take this spring and summer to work on building back lost muscle mass, strength, power, flexibility, and all that jazz, before I get serious about cycling again and give New New the proper CX season she didn't get this year (and some new wheels with tubies). Of course, that's pretty far out to be planning, and I may find myself dying to race in April. We'll see.
Posted by Lindsay Hall-Stec at 9:14 AM

Just worry about a healthy recovery, and don't rush yourself back into sport. You are young, it will be there for the rest of your life! Your body will tell you when you are ready to train again. Maybe it will be April, maybe June. Whatever it is, be good to yourself.

Be safe and smart. You have years of cycling ahead of you.

Good luck...or break a leg which ever you should say prior to a surgery likr this. I will be looking forward to seeing you out at Versailles this summer after you have healed.

L-Rod!!!! At some point I'm going to come visit your horizontal self...hopefully you won't be horizontal by the time I visit...because it probably won't be until spring break-ish.

When I worked in the hospital I would tell people I delivered food to the horizontal folks. Most people were like "wtf," understandably.

Anywhoozles, I'm sad I missed this gem of a post until today!


Also, I loved the educational pics.

Did you draw them in Paint? People underestimate the power of "Paint."

Hi, Wanted to stop in and wish you luck with your surgery, happy recovery and give you some pointers from someone who's recently been cut open.

First, be gracious to yourself. I wanted to set recorders for the fastest recovery ever and got frustrated when I was immediately doing everything I could before. It's okay to take naps or just lay around all day. Listen to your body. If running to the store makes you tired, take a nap.

Get lots of comfy jamies. It's all you'll want to wear for awhile. When you do start to wear clothes again, skip the jeans. Anything with a zipper or snap will agitate your incision. I've found that leggings and stretch pants are my new best friends.

Hydrate and eat lots of small simple meals. I was 'hungry' for a long time while I was recovering, probably because my activity level dropped and I didn't eat a lot. I lost a lot more weight than I should have.

Have a 'schedule' for your downtime. I knew not having anything to do other than lay on the couch would eventually start to agitate me, and could make me feel depressed. I set up my days like I would if I were healthy and going to work or something. I got up every morning, washed up and put on fresh PJs. In the mornings I would read, play piano, and write. A nap after lunch. Knitting and crafting in the afternoon. And then movies or more reading in the evening before bed. It helped the time pass quicker when the day seemed to flow and I didn't have to sit there thinking 'now what.'

I'm single so this was a little more important to me, but make sure you have a couple of people that you can call if you need something brought to you, like TP, Milk or when I was desparate Ice Cream.

I hope this helps. Good Luck and have a fast recovery!