Triple Race Report All the Way!!!

I was so tired after my Java Johnny's CX and Brown County Breakdown weekend that I put off blogging for a few days. Then I got really busy the last half of the week. Then it was time to race again at BloomingCross, so I figured I would just roll it up into one big TRIPLE RACE REPORT ALL THE WAY. (What does it mean???)

However, a week and a half later I don't remember a lot of what I was going to say about JJ's and the BCB. Basically, Java Johnny's had the big, intimidating 60ish person field that I mentioned in my last post. Unfortunately, I couldn't muster Adam's swagger, and I found myself REALLY intimidated on the starting line. I would say that my start was not great and not terrible, but with that many people, not great still puts you 20 places back at the first turn and near stopping through all the little chicanes leading to the first sandpit. I did pretty well at getting off, running the sandpit as fast I could, and taking off again, but I messed up going into the steep ridge that we had to ride over twice in succession early in the lap. I just couldn't power myself up, and had to run it. We hit the mid-lap twisty section and I was determined to use my cornering skills to make my way back to the upper mid-pack, but there were nuts all over the bases of the trees and I ended up crashing not once, but twice, before the middle section of the first lap was complete. By the time I got myself upright and going the second time, I well behind the group of racers I wanted to be with and had to motivate myself to pick through the back of the pack. I made up a few places, but I still ended up 22 out of 27 which was disappointing. 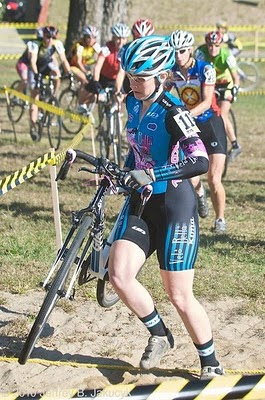 I seem to be doing pretty well here, but this was before I fell in the nuts. Twice. 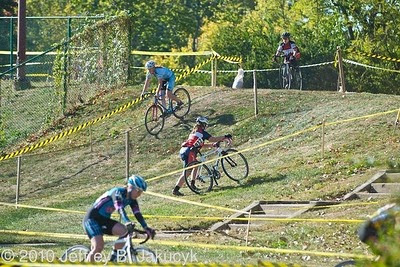 Much further back post-nuts. I am ahead of everyone else in the picture, though. 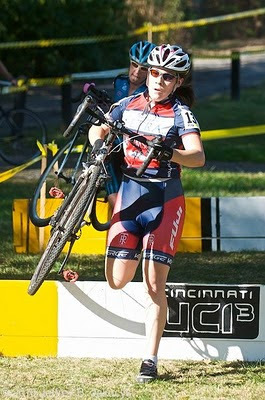 In the background making my barrier face.

The next day I did the 60 mile route of the Brown County Breakdown. I'd never done this ride before, because it always conflicts with the Cincinnati UCI 3 weekend, but this year I gave up racing on my old favorite CX course at Harbin Park because I knew I needed to get in a long training ride before the Berryman Epic. It was hot and dusty to the point that the trails were kind of slick from dust instead of mud, but overall it was a pretty good day. I overcooked myself a bit early on trying not to slow down the long train of riders making their way through the North Tower Loop, Aynes Loop, and up to Hesitation Point. I have a fun moment going up Hesitation Point when I rode the S-shaped rock garden and most of the guys around me didn't.

After the first aid station at HP, the traffic got a lot more sparse and I settled in for a few hours of riding by myself at a comfortable but solid pace. My goal had been to go under 7 hours, mostly because I figure that going under 7 hours at the Brown County Breakdown is an important step to my long wished-for sub-7 hour finish at the Ouachita Challenge. I did okay through the ride, but I did struggle some during the last two hours. I ended up going about 7:25, but I also spent more time at the rest stops than I would have in a race, so it wasn't too bad. It was at least enough to make me feel confident that my riding once or twice a week plus racing CX on Sundays training plan of the two months hasn't left me too under prepared for the Berryman Epic.

It really is looking like what I told Jason back in August: Even if I train really hard, I probably won't get on the podium at the BTE, and if I focus on 'cross and just do a couple of long rides I'll still probably do okay. That may seem like a little bit of a defeatist attitude, but I'm actually mostly happy with the way things are going now. I'm not highly motivated to train, but I'm enjoying racing. So if I can't just squeeze one more month of fun out of my residual fitness from earlier in the season I will be happy. Then I'll buckle down and start getting into serious preparation for the spring endurance races again. 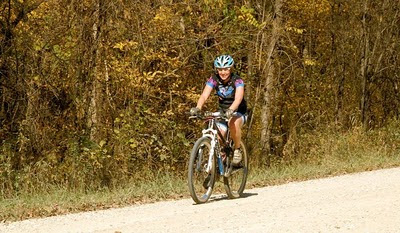 Spinning on some dirt road at the Brown County Breakdown.

Finally, Sunday was my first opportunity to race "above ground" cyclocross in my hometown at BloomingCross, since I missed the inaugural BloomingCross last year when I was at the Pisgah Stage Race. Besides being a home race, I was also excited because a lot people were taking the weekend off between the Cincinnati UCI 3 and the USGP Louisville. That would mean a smaller field and a shot at a top 5 or, on a really good day, podium for me. Regardless, I was looking forward to being able to tell what was going on in my race after the previous weekend's giant jumble. I pre-rode the course on Saturday and I determined that while all of the wide, flat straightaways weren't going to help my case, that if I could get a good start and make it the rideable sandpit about a minute into the course with good speed, that it could still be a good day for me.

Unfortunately, I must have spent too much time thinking about this plan, because standing in the staging area, I was ready to throw up. When the whistle blew, I stood to sprint to the front, but I seemed to be going in slow motion. I was just pedaling and watching racers come around me from the row behind, and thinking "Noooooo!" By the time, I hit the pavement downhill before the sandpit, I was in next-to-last out of the women and had several of the juniors that started behind us clogging the way. I still tried to get enough speed to ride the sandpit, but it's hard to do with that many people in front of you. I had to dismount and run the rest, at which time was I passed by the last place women putting me DFL with some juniors preventing my immediate catch-and-repass. In the end, I did get my top 5, but that was because there were only 7 starters in my class, one dropped out after I passed her, and I passed another for next-to-last. I was pretty bummed about my missed opportunity, but hopefully two weeks away from 'cross and a 55 mile trip through the Ozark mountains will bring me back to Storm the Greens in costume and with my head on straight.

Posted by Lindsay Hall-Stec at 9:41 AM