They Call Me New New 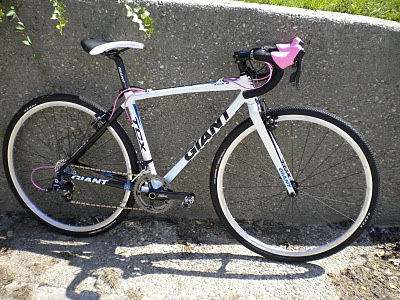 This is New New. She's a rich girl from a nice family. They wanted to send her to the Ivy League (Granogue), but in the end she got her way and was allowed go to the HBCU (historical badass cycling university) of her choice. Although they raised her to be elite, she's going to be slumming it this season trying to help me work my way out of Cat 4 in the OVCX series. 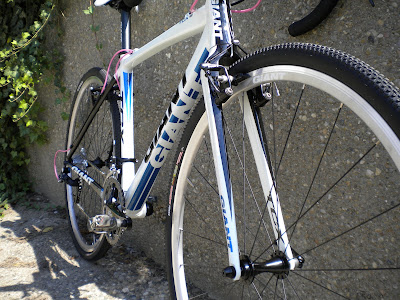 She can be classy and refined, with her subtle white and black paint job, but has a slightly more gaudy side, with her blue glitter-paint underbelly and pink highlights. 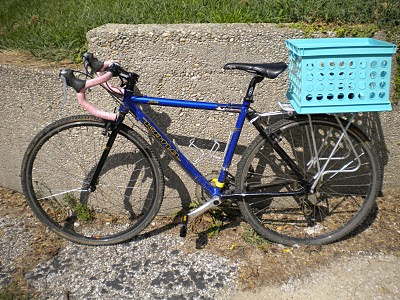 This is Jake, a poor boy from the 'hood. Jake did his best for a few years trying to make it as a 'cross racer, but he just wasn't very fast. Kona marketed him as an all-in-one entry level 'cross bike and commuter bike, so lately he's been working in the less glamorous commuter field. Getting used to the basket was hard, but it's satisfying to be appreciated again. 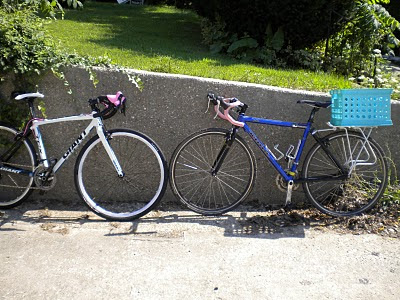 Then New New met Jake and they fell in love. I got home from work today she was leaned up against Jake in the back room of the basement. I just hope we can make it through 'cross season without the birth of any metallic blue push bikes.
~~~
Okay, so I remembered a little more about the character for which New New is named and I did my best to draw some parallels. Apparently, I only name CX bikes, but even Jake only has a name because he came with it. She's also the first "female" bike I have owned. Not women's specific, because my Anthem is women's specific. For some reason, though, I've always thought of him as a metro sexual boy, but I've never given him a name. My 29er is definitely a boy, as well. I'm not sure where I come up with these things.
Anyway, anthropomorphizing aside, New New is one killer bike. I took her out on a test ride yesterday on a mix of pavement, singletrack, and gravel road. She's so light (even lighter than my road bike), and just floats over the rough stuff. I'm totally looking forward to racing 'cross on my floaty bike.
Posted by Lindsay Hall-Stec at 5:56 AM

Sweet new ride Linsay! Gotta love a good lookin cross bike for some off road fun.
My race season stands at 8 planned races. I'm hoping I get to race them, and looking forward to racing cross on tubies for the first time too.