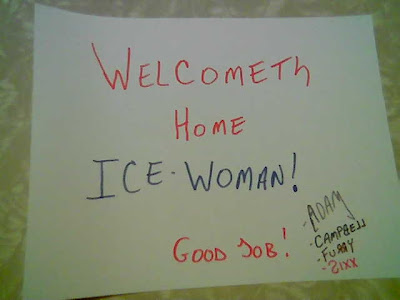 This was the sign that was sitting on the kitchen table when I got home from Michigan last night. (The cats have pretty good handwriting considering they have no thumbs, right?) Of course, thanks to modern technology rarely used in mountain bike races, Adam already knew my results beyond my vague text message report of "hard" and "slow".
Really, I think that's all anyone needs to know, but I'll try and elaborate a bit.
Even though I'd originally entered the pro/expert class because that what's my age/license says that I am, I quickly wussed out when I realized that the pros had a special 2:30 start and I would not be able to hide my slowness in the massive crowds. Luckily, the Iceman staff was accommodating and let me downgrade to sport women 19-34 at the minute. That was the best decision ever since I ended up going roughly an hour slower than planned and was closer to the bottom than the top of the sport class.
Apparently, I get slower when I don't train. Who knew? I realize there are a lot of people in the world who can stay pretty darn fast on minimal training. I am not one of them, but I seem to forget that without frequent reminders.
Basically, I made it through the race in slow anonymity and had a nice vacation. The course was much harder than I expected. It was not technical, in that there were hardly any tight turns, roots, or rocks, but there was a lot more climbing than I expected. The course was full of little steep, sandy grinders that caused me to keep going anaerobic and sucked a little more of my power after each one.
I need to address this whole steep-hill, anaerobic, power-sucking issue before next spring, but I'm not totally sure how to go about it. Do I focus on my climbing/baseline power so that I don't go anaerobic or do I focus on being able to go anaerobic without it sucking my power so fast? I'm not sure. I guess this would be a situation where it would be nice to have a coach again.
Oh well, I'm not getting back on that horse until at least April. Until then, I'm going to do about 3-4 more weeks of running, 2-3 weeks of transition/prep, and then basically do the "super-base" block that my coach assigned to me last January and February. I'm very confident that it would have been an effective plan had I done more than 25% of what I was supposed to do during that time period.
Posted by Lindsay Hall-Stec at 12:34 PM

Hey...HAPPY BIRTHDAY. I hope you have a superb exquisite euphoric day.

Thanks! For some reason, I'm having this weird down-low birthday. I guess I decided that 28 was too old to make big announcements to everyone, but word seems to be getting out anyway. :)