And who are you, the proud lord said,
that I must bow so low?
Only a cat of a different coat,
that's all the truth I know.
In a coat of gold or a coat of red,
a lion still has claws,
And mine are long and sharp, my lord,
as long and sharp as yours.

This weekend we traveled to Trexlertown, PA for Nittany Lion Cross, which was the opening weekend of the MAC series. We’d already signed up weeks ago in an attempt to get good call-ups, even though we later decided that we are going to pursue the PACX series instead of the MAC. Regardless, it was still a good opportunity to get some racing in, and try to be ready for the PACX races later in the season.

The first day was blazing hot again, and it took its toll on me. I rode well enough in the first lap, although there was a lot of traffic. Despite my quick sign-up, I was still called up 31st, because everyone with any MAC points at all from last year got priority. It didn’t really matter in the end, because I didn’t fare well on the roughly bajillion long straightaways that made up the course. I kept being passed by 2-3 girls on each one until the end of the second lap where the heat really got to me and I succumbed to the “I can’t keep going this hard for two more laps” thoughts. I slowed waaay down to try and get my body feeling under control again, during which time I was passed by several more people. Then I kicked my rear brake open on a remount near the end of the third lap. The stupid amount of time it took get it hooked in again did give me a chance to catch my breath, but also lost me a few more places. At least when I finally got going again, I was able to put in a decent last lap, but there weren’t a lot of people left to chase down, so I ended the day 50th out of 55. 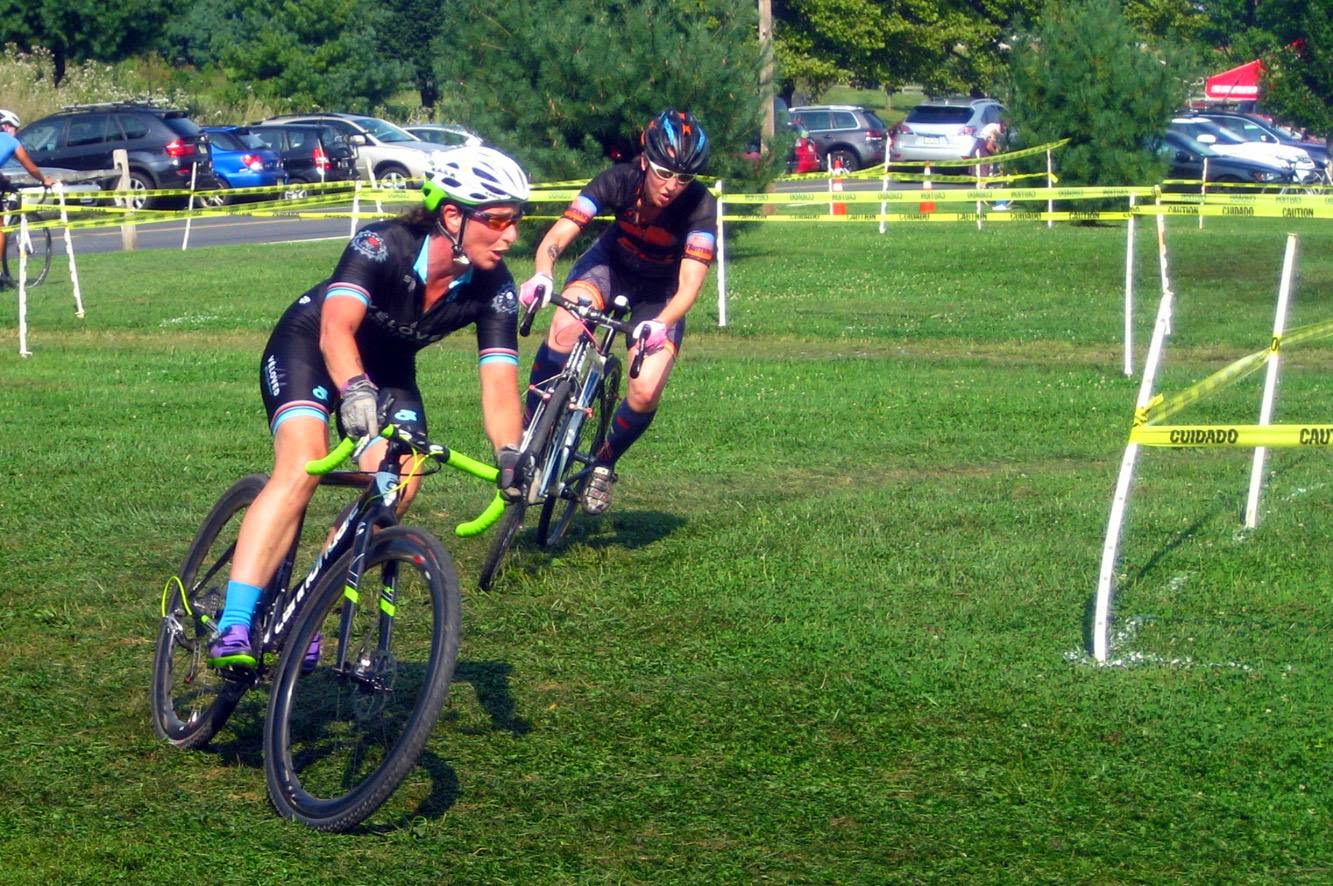 The second day was cooler and a little damper, with one good mud puddle, at least. I started out with the goal of simply riding hard the entire race and not blowing up. There was also a girl that I was getting close to catching before my blow-up on the first day, so I also set the goal that if she were in my sights once the initial scramble cleared out, that I would work extra hard not to let her get away. I was more conservative during the first lap than the day before, which meant that I was basically just cruising around amidst the traffic for the first lap. It’s not really my style to sit behind girls that are slower than me in the turns, but after the suffering I’d experienced in the last couple of races, I decided to just deal with the annoyance for a while rather than putting myself in the hurt box to get in front them only to be passed back in the straights and be much worse for the wear. As much as practicing patience during this race annoyed me, I guess it was what I needed to do.

Near the end of the second lap, I found myself closing in on my mark, but with two laps to go, I decided not to put in a pass until I was more confident that it was going to stick. This meant following her slowly through the twisty part at the end of the second lap, then letting the rubber band stretch a bit through the long straightaway through the finish. I set a steady pace going into the third lap and watched her slowly come back to me. I was finally right back on her wheel before a 180, and I decided to go for it. I sprinted to the turn, got on the gas, and never saw her again. I did my best to recover from that effort and stay strong through the rest of the lap, but I couldn’t seem to gain any ground on the next group of girls who were about a minute up. I ended up 40th out of 50, which was an improvement on the day before, but nowhere near the mid-20’s place that I’d hoped for coming into the weekend. 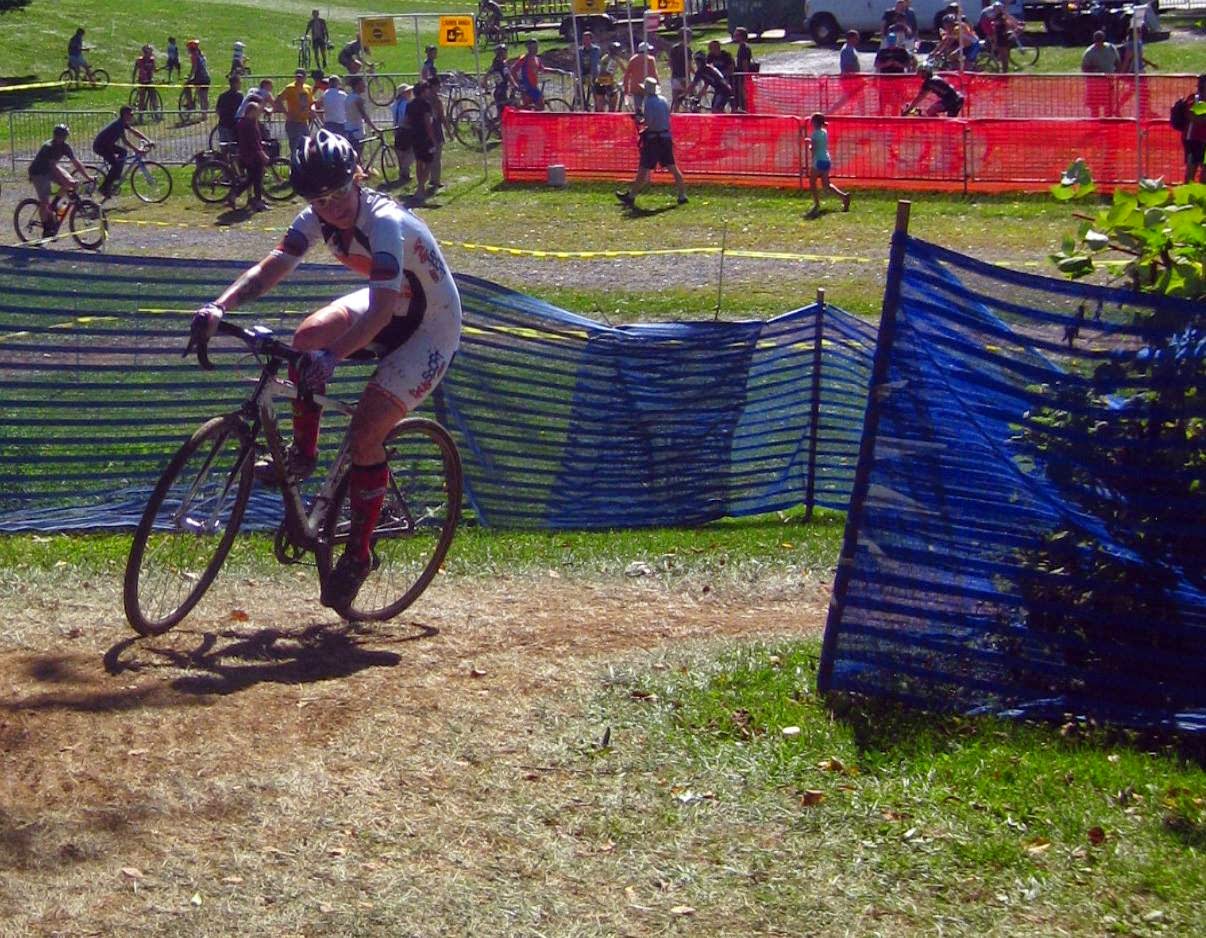 So now I have a pretty honest assessment of where I stand at the beginning of this season, and although it’s not where I want to be, at least now I can adjust my goals to my current state of fitness. The good news is that I will soon have both victims and nemeses on crossresults.com again, which hasn’t really been the case the last couple of years. So although a series championship is probably off the table, I can at least focus on converting the latter to the former, just as I did on Sunday.

My biggest struggle since moving to State College is that my methods for training, eating, etc. that have brought me success in the past don’t work in the new context, and I have yet to discover what does work for me now. I feel like I’m getting closer, so I hope that this cyclocross season can be used for good in that sense. My 2012 season was a bust results-wise, but I learned a lot of important things that helped me be successful in the winter and spring. That is, of course, until I blew away the context again and had to start over in new circumstances. What I hope to gain from this season is to start learning some new success strategies that will hopefully pay off next year, even if the success is not immediately apparent.
Posted by Lindsay Hall-Stec at 10:18 AM