pe·nul·ti·mate
adjective
1. next to the last: the penultimate scene of the play.

I've always liked that word for some reason. I first learned it during my college track days when I'd hear the coach talking to the jumpers about their penultimate step, which I gathered was critical to a good jump. Of course, it sounded way cooler than what it actually meant. I've had plenty of penultimate finishes in my cycling career, but yesterday was the penultimate (perhaps ultimate?) race of my Cat 4 cyclocross career. Luckily, I did not finish next to last; I finished next to first.

I guess I can admit now that I was really hoping for first-first, but it didn't happen. The combination of a small field and sloppy conditions set me up for my best shot at a for-real overall win possibly ever again (save some huge improvement on my part plus hella mud plus Nikki Dalliare doesn't show up scenario in the far future).

At the start, Karin Reed took a huge jump off the front, and I spent most of the first lap chasing her down. As I got closer, I realized that the pack behind me was thinning considerably, but that Sharlyn Golding was emerging and getting closer. Even though it was only her second cross race, I knew she was strong from Storm the Greens and that I only beat her there because her road bike with cross tires setup failed to survive "the Christmas mud hole" and gifted another position to me. However, she had returned to Lexington with a new 'cross bike, and despite the fact that the whole course should have been my Christmas mud hole, it appeared that I wasn't to be given any gifts that day.

I successfully caught and passed Karin early in the second lap (we only did two due to the long course and slow conditions) and then just tried to ride like hell and keep away from Sharlyn. She did eventually catch me with a couple of minutes to go, and then I got antsy trying to get back in front of her before the final uphill. I didn't have the confidence to go up against her in the final uphill once we passed the technical stuff, and I became overly aggressive. I ended up making a few minor slips and losing several bike lengths, so that I spent the last section just hammering to keep Karin from passing me back. In the end, second place was still pretty good, but I really wanted to win one. 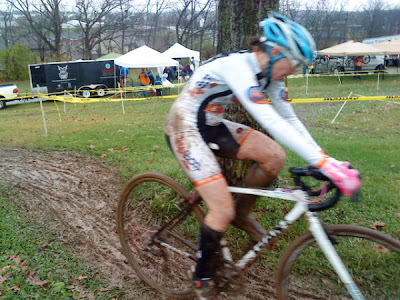 So after nine races, my Women's Cat 4 Open OVCX championship is secure. My lead is greater than the points available at the final race, so regardless of who wins, they will not pass me in the series points standings. Since a Cat 3 upgrade is inevitable in the near future, I'm debating whether I should just go ahead and race Cat 3 at the OVCX finale.

Pros:
1) I want to see how I stand against the next level of competition in real life, rather than just comparing lap times. I *probably* won't be DFL.
2) They are paying 20 places deep, so I might win money.
3) We wouldn't have to leave before the crack of dawn like we have all season, because my race would be later.

Cons:
1) If I race 4's, I could still get my elusive outright win, even if the Kings CX field is a little tougher than at Lexington. Especially if I cross my fingers for more mud.
2) I'm not sure how informative racing my 2011 self against the Cat 3 field will be, because I'm expecting my 2012 self to be faster. Maybe I should just enjoy one last Cat 4 race, and leave the measuring stick for next year's AppleCross or whatever tune-up races are available.
3) If I race 3's, I will miss most of the Shamrock Cycles vs. Rogue Racing heckle-off. Although switching my role to heckle-ee instead of heckle-er does have it's appealing points, I probably won't get a accurate idea of how I stand against the 3's if I spend the whole race grabbing dollar bills, bacon, and Jello shots.

Looking at my list, I seem to spend more time justifying my cons. I'm not sure if that means I really don't want to cat up yet or that I really should cat up because I need so much justification. Regardless, I have about a week to mull this over, and I'll probably change my mind at least five times before I actually register. Feel free to share your opinion in the comments. I also raced the ICX race at Major Taylor Velodrome on Saturday. Despite hopes that the short and slippery course might play to my advantage, I overcooked a couple of turns in the first few minutes and had to work my way back up from last place. So it ended in typical ICX form, Rebecca and Val up front, me a minute or so back, then the rest of the field a couple of minutes behind me. I'd be thrilled if I could beat just one of them at one race by the time the series is over, so I guess that will be the post-OVCX goal to get me through December.
Posted by Lindsay Hall-Stec at 12:43 PM

er..."conundrum." Fun to say but hard to spell or figure out.

Yes, after my penultimate race, I have a conundrum.