Harbin Park 2011: Returning to the Scene of the Crime

Harbin Park holds a special place in the the cyclocross-related section of my heart. It was the venue of my first 'cross race back in 2006, where I came in last out of six women. It was also where I got the crazy idea to try and race the elite class the next year, because there were only ten elite women so everyone got prize money and UCI points. How freaking cool would it be to have a UCI point? The next year Katie Compton showed up, destroyed the elite women and most of the elite men, and put Cincinnati on the UCI cyclocross map. No more freebie UCI points would be handed out from that point on.

As for me, I was learning that, while my mountain biking skills had improved, I hadn't made much progress in gaining the raw power necessary for 'cross success. The only success that the 2007 Harbin Park brought was that I was *not last*. I used my mad skillz on the final turny sections and beat *one girl*. Afterward I witnessed the top girls from my category getting their podium pictures taken in front of the United Dairy Farmer's banner, was extremely jealous, and subconsciously thought, "UCI point be damned. I just want my picture taken in front of that banner." 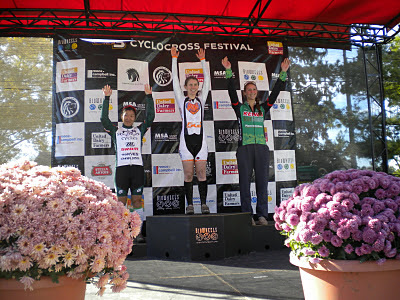 Okay, so the fields have evolved a bit since 2007 in that yesterday all females over the age of 15 with no UCI license were lumped into one wave. Within that wave, there were categories for Under 19, Cat 4, Cat 3, and Masters 1/2/3/4 35+. With the Masters World Championships coming to Louisville this winter, efforts are being made to allow masters women to stay out of the UCI elite races and preserve their eligibility for worlds. Good for them, but it also means that us Cat 4 chicks have to race in much faster fields at the big races.

So the field was big and fast, but really there were only six girls in the Cat 4 open class. A couple of my key crossresults.com "nemeses" had signed up for the race but didn't show up, and another didn't finish. So as cool as it was standing on the big stage, it didn't require the dominating performance to get there that it would have in years past.

Overall, I finished 17th out of 35 starters. The field was about half 3's and half 4's with a couple of juniors and one masters Cat 2 (and several 3's that probably should be 2's). It was a good opportunity to see how I stood against the next level of competition, since my days as a Cat 4 are numbered. I beat a few Cat 3's and was the fastest of all the OVCX regulars from my wave, so I think fared pretty well. I think I'm close being able to race in the OVCX "big girls" race without getting my butt completely whipped, but I'm not totally there.

If my magic deadlift-centric training yields the improvements in 2012 that it did in 2011, it shouldn't be a problem. The blessing and the curse of improving way more this season than conventional wisdom says I should have is that I really have no idea what to expect next season. I just have to keep doing what I'm doing and hope it keeps working.

Next weekend I will get a chance to test myself against more Cat 3's as the 3/4 field at the Louisville USGP is huge and dare I say, sandbagger-tastic. Yeah, I said it. I guess I should be glad for the experience, but it annoys me that they have a 2/3 and a 3/4 race going at the exact same time and practically all of the 3's signed up for the 3/4 race, despite the fact there will probably only be a couple of 2's at most. But I guess if I get too whiny over getting bumped off the podium for the weekend, that kind of makes me a sandbagger, too.
Posted by Lindsay Hall-Stec at 3:28 PM

good luck at usgp! glad you are rocking it this year. very cool. my crash at gun club totally did me in, and im calling it for the year. i wanna enjoy my bikes from here on out.