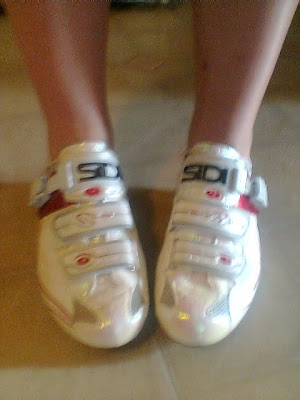 Most of my blog posts can be grouped into three categories:
1) Workouts I dominated
2) Races I did not dominate
3) Things I bought or were given to me by Adam as I token of his affection.
This one falls into category 3, because this week has been a bit of a gray area training-wise. After my supreme laziness last weekend, Jason let me off the hook for my one meaty workout this week, so it's just been a lot of a Zone 2 that's not too exciting to talk about.
I am, however, pretty excited about my new shoes. I've been wanting new road shoes for a while now (preferable white, because that's so pro), but they were pretty low on my priority list because the Sidi T1 triathlon shoes that I've been road riding in since 2005 are still perfectly functional, except that I haven't actually done a triathlon since 2005. However, when I discovered these puppies in the Velo Bella classifieds for $100, I jumped on it (they are listed for $350 on teamestrogen.com). They are Sidi's second most high-end women's road shoe, and the most high-end that they make for small-footed women like me.
Most importantly, they are white and they are sexy, at least for cycling shoes. However, instead of being plain white, they are shiny, iridescent white. The girl I bought them from said that her boyfriend described them as being made from My Little Pony skin, which is both hilarious and slightly disturbing, since I once had an obsessive devotion to My Little Ponies. The original 1980's versions were not iridescent though, so I think can happily wear the shoes without imagining them being made from the hide of Baby Glory.
Posted by Lindsay Hall-Stec at 10:07 AM